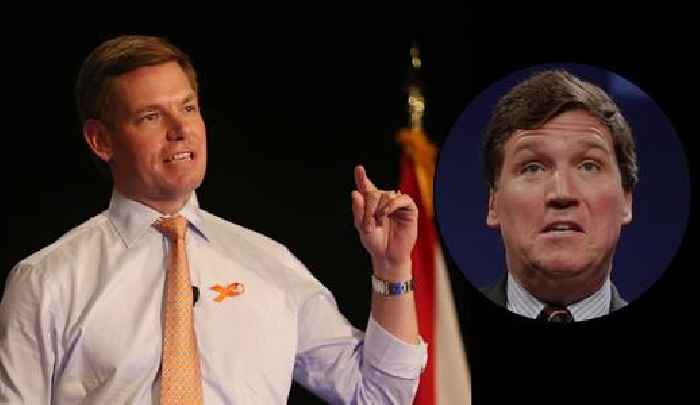 It goes without saying that Rep. Eric Swalwell and Tucker Carlson are most definitely not mutual admirers -- but the California Democrat scored points with fellow liberals Friday night when he posted screenshots of an awkward text exchange he had with the Fox News host.

The exchange began with Carlson asking Swalwell to give him a call, and Swalwell replying in so many words, "no."

"Tucker, I’m hesitant to do that. You falsely smeared my wife on Tuesday and she’s getting death threats. That’s way out of bounds. She’s a pregnant mom of a 4-year-old and a 2-year-old. Hit me all you like. But to go after her. That’s just wrong," Swalwell wrote.

After calling Swalwell a "coward" for refusing, the screenshot shows that Carlson is the one that picked up the phone. Swalwell didn't hedge in his response exactly what he thinks of the host.

"After years of lying about me and my family, @TuckerCarlson is losing his mind that I won’t return his calls. Sorry, Tucker, I’m just not that into you. Who knows what lie he’ll tell next? #TuckerTantrum."

After years of lying about me and my family, @TuckerCarlson is losing his mind that I won’t return his calls. Sorry, Tucker, I’m just not that into you. Who knows what lie he’ll tell next? #TuckerTantrum pic.twitter.com/vwX7AfwJ1Z

Although the tiff has been years in the making, Carlson pushed the wrong button when he went after Swalwell's wife, Brittany Ann Watts, earlier in the week he aired a segment titled “Eric Swalwell Has a Problem With Money." In it, Carlson said, "Most interestingly on the disclosure form, more than $20,000.00 of Eric Swalwell's campaign expenditures went to the Ritz Carlton Hotel in Half Moon Bay, California. Now, weirdly or maybe not so weirdly, Eric Swalwell's wife is an executive at that very hotel."

Although Swalwell has appeared on Carlson's Fox News show a number of times, Carlson has repeatedly provoked him with unsubstantiated claims, including that he had an affair with a Chinese spy.