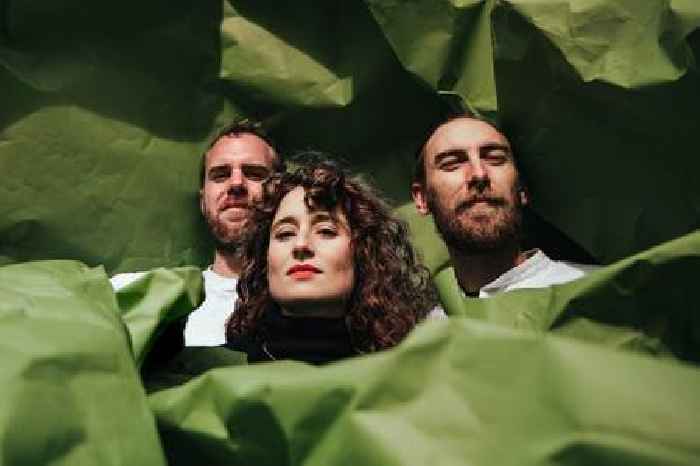 The electronic trio reflect on their dreamy sophomore LP...

It doesn’t feel like it’s been all that long since Clash last caught up with *Elder Island* to discuss their debut LP, 2019’s stellar 'The Omnitone Collection'.

But while life has mostly been on hold for most people this past year, the same can’t really be said for the Bristol-based group. Comprising of vocalist and cellist Katy Sargent, bassist and beat maker Luke Thornton and guitarist and synth player David Havard, Elder Island have spent the best part of the last year together in lockdown crafting their follow up.

Born from recording sessions that began just weeks prior to the start of lockdown, Swimming Static deftly hops between genres with group’s unique blend of electronica, indie, pop and neo-soul.

Clash caught up with Katy, Luke and David to discuss the new record, the challenges of learning to play it live and the unique buzz associated with allowing your work to be remixed by others.

*You hear stories about artists that thought lockdown would be this period of creativity, but for whatever reason it didn't really pan out that way for them. That hasn’t really been the case for you guys, has it?*

*Luke*
I guess it was more escapism from. We'd been together, so it was like, “Right, let's hunker down and ignore all of that chaos that's going on and just make some tunes in the basement.”

*Katy*
Yeah, I set out to do some things independently, like “I’m going to paint!” But I didn't do any of that shit. But we did make the album, so...

*That’s a pretty good outcome. I take it the album was kind of gestating before lockdown happened.*

*David*
We did four weeks straight of sessions before lockdown happened. I guess that’s why we felt inspired because we'd already thrown loads of ideas out there. We’d been locked away for a whole month anyway and then lockdown started and we were like, “We were just coming out of the basement. Fuck it.”

*Luke*
It was a year off The Omnitone Collection coming out. We did two worldwide tours off the back of that, so after a year playing the same music over and over again, we wanted more tunes to play… Our last show was at Printworks - we played 1st Feb and then on 2nd Feb, we were like, “Right, we've got no shows booked now, we can go straight in to the studio and start cracking on.” We were kind of hyped and buzzed to start making music again.

*Tech’s a big part of what you guys do. What's the best bit of kit that you've splurged on for the new record?*

*Katy*
I got one of the 500 Series lunchboxes and we just filled it with API pre-amps, loads of radial interfaces and it became a bit of a hub, didn't it? Because it's so easy to plug things in and then David made it so that you could re-route it through the desk and then put it through the delay… That was a really good multi-tool.

*David*
There was a lot actually on this one. Me and Luke bought a load of Euroracks - lots of modular systems that we've been playing around with a lot more.

*Luke*
The modular rabbithole. Nobody should ever do it.

*David*
Hence why we didn't get bored.

*You’ve been extensively remixed by other artists. Is there anything that particularly inspires you to open up your work to other artists like that? Do you tend to approach them first?*

*Luke*
I guess, we put the feelers out there, see who is actually willing to do a remix and then we set our bar quite ambitiously high. And we're always like, “Well, if you get that, I'll kiss you on the mouth because there's no way that you’re going to get that person to do a remix for us.” Then our management team go away and they can't get that and then they come back with someone else and we kind of vet it whether we're happy with it or not… There are certain people on a dream list that we're still hounding every time we write a song like, “Hey, how about this year?” “No, we're still busy. No, we're still not doing your remix.”

*David*
They start ignoring us.

*Luke*
Until we turn up at their show and we go, “HAVE YOU HEARD THIS SONG YET?”

*Are there any in particular that stand out?*

*Katy*
I suppose the Leatherette one. It’s amazing. And they really like flipped the track, but it just sounds incredible. Like, we all got it back and we were like, “This is amazing.”

*Luke*
I was quite confused and blown away that Shigeto did one, because I really love his stuff. And then when he came back with like an acid, house track, I was like, “What?”

*You guys are heading out on the road again from October. I understand you’re working on your own green initiative for touring too?*

*Katy*
It's the steps that we're taking and we're still learning. We’re such a small band. I think it's just kind of like what we can do… We don't really make money off touring, but it's enough to kind of try and not damage the world by doing it.

*David*
It’s anything that can kind of help make it more sustainable to do, to keep on touring in the way people do, but to kind of gauge what's achievable in a band at our level. Out of charities that we support and want to put money towards, we're at the early stages of just kind of implementing it… We're trying to just offset any kind of travel that we can, because we can't do anything to change that kind of thing happening anyway… You're looking more at the methods to see how feasible it is. Obviously, we would like to take a certain percentage of profit or ticket sales and feed that towards progressive initiatives.

*Katy*
We're trying to keep it quite localised, so instead of putting money into a charity that’s planting tress miles away, if you're playing in a certain city, or in the UK, then it would be a UK-based localised charity.

*What will it mean for you guys to finally get out and road test these songs after all this time?*

*Katy*
We're just translating it now… kind of reinventing it in a way. We like to give the live show a bit more of a kick… Then also being able to actually play it, because we don't really use backing tracks or anything. Then you have to kind of move around how the tracks are formed. It's exciting. It's challenging, but good.

*David*
Because we've been given so much time, it’s been a real luxury to actually feel like we're getting ahead of ourselves instead of feeling like we're setting off on tour on the backfoot, or having to pull an all-nighter the day before leaving, soldering bits of wiring together and finishing rigs. But this time we’re feeling like, “Oh, we're gonna have it built months in advance.” We can rehearse it out and like really polish stuff up a bit more and kind of figure out a better production, with time to spare.

‘Swimming Static’ is out now.