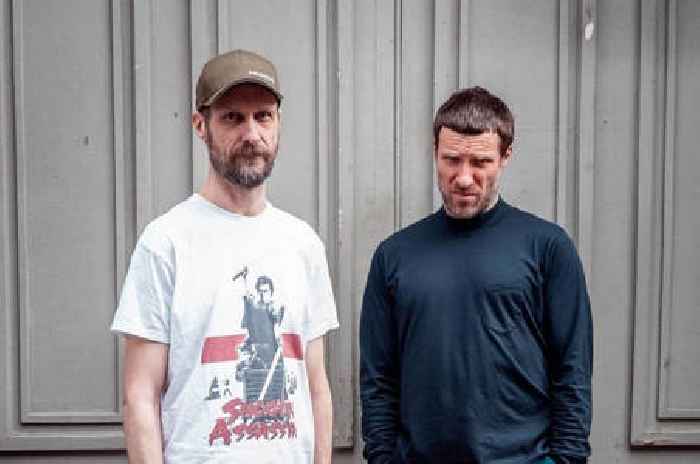 It’s day 30, or thereabouts, of the Covid-19 lockdown, and Jason Williamson from *Sleaford Mods* has been flirting with the muses.

"I’ve been doing some drawing," a stubbly east-Midlands accent tells Clash down the phone.

"I keep thinking about Frida Kahlo – sat in bed with her manky leg. She couldn’t do fuck all either, could she, so she just started drawing pictures of herself. Her drawings weren’t very good. Then, over time, they got good."

We’re chatting because Sleaford Mods have a compilation of odds-and-sods fan favourites and old rarities coming out called ‘All That Glue’, spanning the duo’s first seven years of abrasive shouty post-punk.

Here’s what everybody’s favourite gobby iconoclast has to say about, well, everything right now…

*What exactly does self-isolation look like in the Williamson household? Sourdough starters and Joe Wicks?*

I’ve been doing Joe Wicks in the morning, yes. It helps the kids. Otherwise they start hitting each other, see. After a sesh with Joe the endorphins kick in, and we’re all more positive about the day ahead, aren’t we.

It’s brutal, his workout, if you actually do it properly.

*Has this whole Coronavirus situation got you anxious or scared at all?*

That initial feeling of armageddon, the zombie apocalypse vibe, has subsided for now. Everything is quiet. People have realised, alright, this is a pandemic, this is what we’ve got to do.

The government is fucking useless, obviously. Priti Patel does my head in. And that Hancock geezer. They’ve clearly made a colossal fuckup of it all, I hope the truth should come out after this – but I doubt it.

*You’re a big Jeremy Corbyn fan, or you were anyway – what do you make of new-minted Labour leader Keir Starmer?*

I lost interest in Labour completely after the election result. Someone told me he came from a humble background, which appeals. But a leader doesn’t have to be working class – that sort of thinking is stupid. All I ask is for somebody with a kind heart. I know lots of working class people who are total wankers.

*Some brainy types I’ve spoken to reckon this crisis could be a perfect way of introducing a Universal Basic Income, would you be up for that idea?*

If it would help. I do know that the longer I’ve been sat at home, the less I’ve thought about buying trainers. When the machine stops, the motivation to earn more money has stops with it. Thing is though, as soon as the machine starts back up, all that stuff will become a priority again. Within about an hour.

*Speaking of income, you’ve got a record coming out. Tell me about ‘All That Glue’.*

It’s a retrospective, a way of introducing new people to some of the stuff we’ve been doing over the past seven years. There’s a lot of tunes on it you can’t get online. Stuff like ‘Jobseeker’, ‘Jolly Fucker’ or ‘Routine Dean’, which were put out on limited 7-inchers that you can’t get any more. Most of the songs are fan favourites at gigs, so it’s a nice entry point, or that’s the idea anyway.

*I took my wife to one of your shows, at a festival last year. She absolutely hated it. Said your music was ‘calculated obnoxiousness’. Should I divorce her?*

Me and [other half of Sleafod Mods] Andrew like post punk, and hip-hop, and Tubeway Army-esque synthesizer sounds. Two Lone Swordsman, that kind of stuff. The formula has served us well, to be honest, so we stick with it. It’s our two fingers up to everything.

She can fuck off.

*I’ll pass that on. Grubby lo-fi is certainly the vibe though, isn’t it? Or do you, in reality, spend ages agonising over every little snare sound and vocal take?*

No, I think that kind of attitude is stupid. Some people obviously care about all that. But we don’t. I’m not big on fancy sound systems. I listen to music on my fucking phone. If it doesn’t grab you there, chances are it won’t grab you through a set of posh headphones.

*Before becoming a rapper you played in more traditional guitar bands – what would Jason Williamson from, say, 20 years ago make of you, nowadays? Would he like Sleaford Mods?*

Look, I made the move from that world over to this because electronica seemed to me a more modern sort of music to participate in. Slogging around, carrying amps into rehearsal studios, plugging in, tuning up, breaking strings, making sure everybody can hear everybody else… it’s bullshit. It’s like making houses out of mud, when there’s bricks available.

Far simpler to stroll into a studio with a computer screen, and somebody says ‘right, you come in here mate.’

*When did you realise hip-hop would be bigger influence on your destiny than, say, Paul Weller?*

‘Enter The Wu-Tang (36 Chambers)’. It just sounded like proper punk to me. There’s real life on that record. Anger, chaos, disillusionment, sadness. And the deliveries, all of them, I was obsessed – GZA, Ghostface, Inspectah Deck, Raekwon. I started pinning their delivery to what I was doing, trying to tune into that personality without sounding fucking American.

*You also, it seems, adopted a very hip-hop fondness for striking up beef with rivals…*

Well, there was that one massive example. With Blossoms. And to be honest, from my side, that didn’t go too well. I’m not especially fast, or clever, or witty, and if you’re going to argue with people online you need to be all of those things. I took it far too seriously, and let anger cloud my judgment.

Thing is, hard people – not necessarily saying I’m hard – lack finesse online. I was brought up on the idea that if I don’t like something and it’s shit, I tell the person. And if they say something back, I hit them. It doesn’t really go like that anymore though, does it.

*I like your hifalutin Marcel Duchamp urinal record cover – what’s the story there?*

A lot of our early songs were about urine and faeces, public toilets, the general idea of toilets. ‘Tied Up In Knots’ is about a specific hotel toilet in Hamburg. I had a lot of jobs where the lavatories were no different to the actual place of work. I have some terrible work memories, and I can always remember the toilets.

*Go on, Jason Williamson, let’s wrap this up with a juicy work-related memory….*

I worked in a Little Chef near Grantham around the time I started doing Sleaford Mods. I was the chef, and it was terrible. Spent 18 months working there, travelling to London for gigs and crashing at my parents. Little Chef eventually gave me the sack.

*Why did Little Chef sack you?*

I was shouting at people, yelling, falling out with colleagues. I called one waiter a cunt. Another one I called a bitch. They said I was exhibiting ‘unsuitable behaviour’.

There was this ugly rumour going around that I wasn’t washing my hands. To be fair, I wasn’t.