MOVIE REVIEW: Ready or Not

MOVIE REVIEW: Ready or Not

That time of year is coming up again – where horror movies start creeping back out of the woodwork – and in many cases, you’re going to get a mix of good and bad. However, every once in a while there are a few films which bend the genre just enough to really stand out. One of the best examples of this is Cabin in The Woods, which took a wry look at horror and fantasy in general and managed to turn tropes on their head and inside out in a refreshing way. Pleasingly, Ready Or Not appears to be following a similar trend.

Grace (Weaving) is marrying Alex (O’Brien) at his family’s lavish estate. His family made their money from board games, largely, and as a special ritual, the family requires all new in-laws to participate in a game at the end of the wedding’s evening. This, however, is where things start to get a little murky – as if one particular game is chosen by the spirit that inhabits the house – ‘Hide and Seek’ – it will mean potentially dire consequences for the new member of the family. Of course, this is what is chosen – and what ensues is almost an hour and a half of frenetic, bloodied cat-and-mousing. 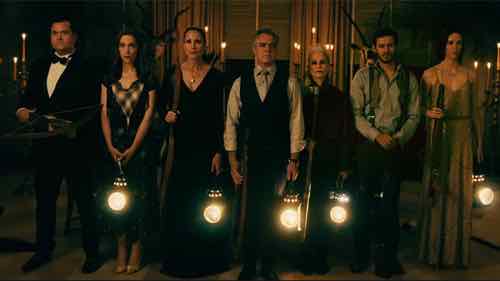 Ready or Not (FOX Searchlight)

On paper, the plot really isn’t anything too surprising. It’s a really interesting premise, and one I’m surprised hasn’t been done to death already a million times before. However, Ready Or Not makes the bold and ultimately successful decision of leaving its dignity at the door. While the level of gore here may be just enough for most horror buffs, it isn’t quite grisly enough to put everyday filmgoers off – and what helps this is the fact that the movie never takes itself seriously.

The pacing is fairly deft once it gets moving, and that only takes a few minutes – while the exposition offered up gives us just enough to work with. What does stand out is the quality of the script and of the lead actors. Weaving in particular is a revelation as a character who, while under intense peril, gives as good as she gets. It’s refreshing for this amount of charisma to be layered onto a lead character in a horror movie. Again, this is all part of the knowing tendencies the script really pushes forward.

The movie is surprisingly funny. Once you get over the initial tension, and the characters start getting more desperate or even wry about the ridiculous circumstances they’re in, it becomes a genuine comedy with horror aspects thrown in. There are genuine moments of horror spectacle while help it stick to the roots of the genre, however, its knowing script really do help it to stand out in a sea of far too serious counterparts. Take an upcoming movie about a killer phone app – Countdown – which is marketed and trailered to appear completely serious and sincere about its content. I can’t speak for the quality of this movie, nor many others, but Ready Or Not’s refreshing approach to the building blocks of horror are well worth pushing the title above the rest of the pack.

Where it does fall down is runtime. I feel there could have been a lot more to explore here, and while the movie does make the most of its generally meagre 90-minute run, there would be much more potential explored in a longer film. We could’ve benefited from further character development. I dare say that, if the directors really wanted to push the envelope, they could have gone even stronger on the gore. Certainly, the final sequence isn’t for the truly weak of stomach, but it’s framed in such a humorous way, and with such discretion, that it’s not completely repulsive. I truly believe that’s what the filmmakers were going for – a horror flick which doesn’t take itself seriously, and which doesn’t feel the need to rely on jump scares or excessive violence.

Ready Or Not is a ridiculous movie which I feel is somewhat let down by its trailer. If you prefer horror movies which are a little less on the serious side, or enjoy series such as the Evil Dead franchise, you’ll likely have a lot of fun here. As stated previously, I think this movie clearly appreciates the Cabin In The Woods line of horror-making, and that’s to its benefit. I just feel that – while the product as a whole is great – I would’ve loved more.

In any case, it’s a movie that will work perfectly as a Halloween party spectacle for years to come. I do hope – however – that it’s not buried beneath other films in the genre which are much less original.